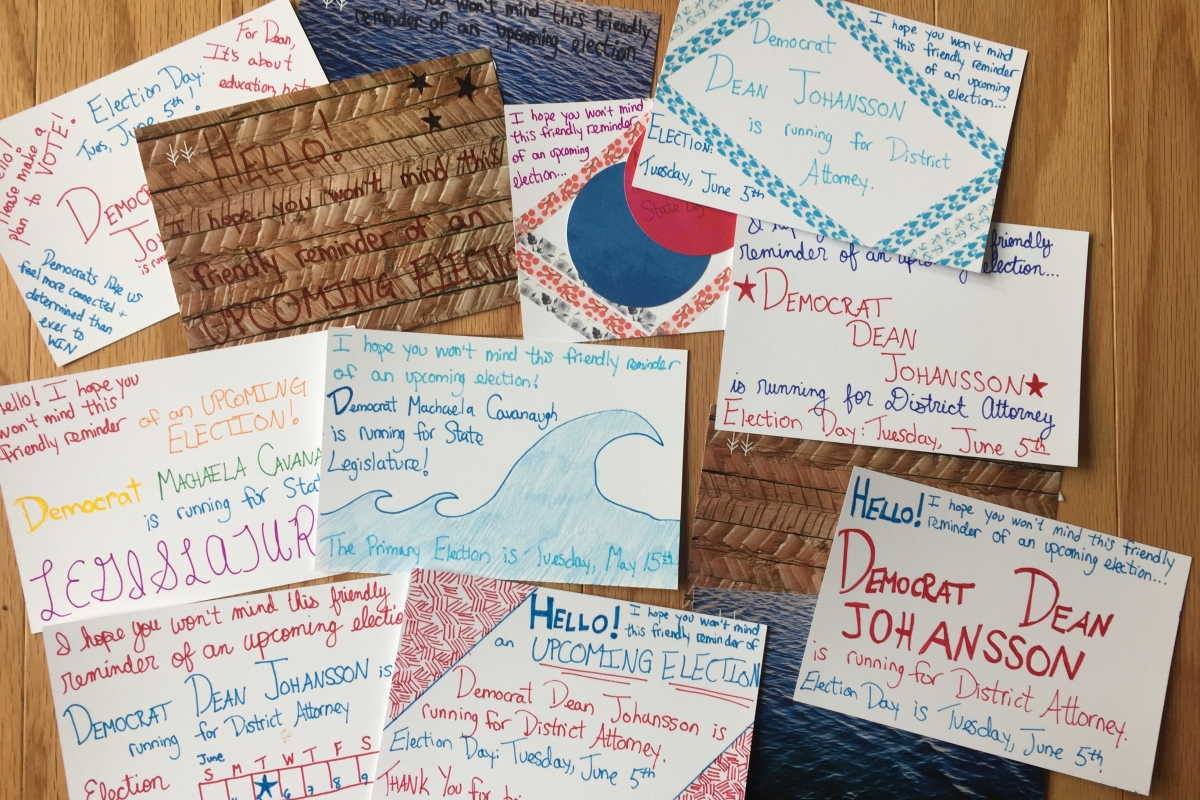 For the past few months, I’ve been volunteering to write postcards to registered voters to alert or remind them of upcoming elections (as well as to mention the Democratic candidate running in that election). My postcards are part of a grassroots effort called Postcards to Voters, which has picked up lots of steam — there are over 18,000 volunteers who have collectively written and sent over half a million postcards.

Heard there's a sports game today, but I've been busy eating frittata and making #PostcardsToVoters with a good friend. pic.twitter.com/t62CV00uy2

As I understand it, the primary goal of Postcards to Voters is not to persuade. We’re sending notices to registered Democrats about Democratic candidates, so I predict that few are undecided about or opposed to the candidate they receive a postcard about. Instead, the primary goal is to increase voter turnout (among people who are already likely to vote for the candidate); it’s a Get Out The Vote (GOTV) initiative.

I mentioned this project to a friend who asked me whether there’s research on the effectiveness of Postcards to Voters. To the best of my knowledge, this project hasn’t been studied, and that does make the scientific thinker in me slightly uncomfortable. But only slightly. Because whether it’s effective for the recipient, I know that creating the postcards is a positive outlet for my political angst. I don’t need research to show me that.

But also, there’s a substantial body of research, especially from political science, that can shed light on when and how Postcards to Voters can be successful for GOTV. Fortunately, a number of studies suggest that while campaigns rarely persuade voters, they can be effective in boosting voter turnout, especially for primary elections (which is what Postcards to Voters is aimed at during this time of year).

However, some research on GOTV initiatives is less than encouraging:

(Yes, I found this information on Wikipedia.)

Along these lines, another study revealed that Democrats who received mail reminders to vote in the 2016 Presidential election did not vote at a higher rate than those who didn’t receive the reminders. Again, this is not encouraging, but we have to consider the context of the 2016 Presidential election: I highly doubt that many Americans forgot to vote on November 8, 2016. For months leading up to the election, the American public was swamped with information, opinions, and advertisements about the election. Those who were eligible to vote and were inclined to do so were likely going to vote whether they received a mail reminder or not. This is a stark contrast to elections that are probably way less publicized, like for the Yolo (CA) County District Attorney or the Nebraska Legislative District 6 State Legislature positions (both of which I have written postcards for this past week). There is a much greater opportunity for GOTV mail like our postcards to make a difference when voters aren’t already inundated by information about the election, when a message could actually serve as a reminder. In fact, at least one past study shows that text message reminders can be sufficient for reminding people to vote.

A couple of little gray cats on #PostcardsToVoters going out as reminders to CA Dems to vote for @Dean4DA on June 5th 📨📪 pic.twitter.com/WqV79vAqIs

It wouldn’t be impossible to directly study the effectiveness of Postcards to Voters, but rigorously studying the initiative would compromise a lot of what makes the effort so great. For one, an ideal study might require the postcards to be standardized, so that every voter gets exactly the same information, presented in similar ways, with the same designs or embellishments on the card. There is currently a base level of standardization — three points (the candidate, the election date, and one other piece of info) that must be included on each card, but there are many other points for postcard creators to choose among if they’d like to add more info, and the design is totally up to them. This is a wonderful aspect of the project, and probably one that keeps people excited to continue making more postcards.

In addition, a controlled experiment would mean that some people (about half of the registered Democrats for the elections that Postcards to Voters target) would not get postcards — they would be the control group. Then researchers would have to track, for each election, whether each registered Democrat received a postcard or not and whether each registered Democrat voted or not, in order to examine the potential relationship between receiving a postcard and voting. It’s possible some researchers are tracking this exact information right now, but as far as I know, voters aren’t being randomly assigned to receive postcards or not. That would mean that we’re passing up sending postcards to half of our target audience, just so we could have a neat control group for experimental reasons. My understanding is that we’re sending postcards to as many registered Democratic voters as possible for each election, rather than setting some aside for control purposes. Again, that is probably a very good thing.

Write with us! Email: Join@TonyTheDemocrat.org
Together we’re flipping and defending key seats for Democrats across the country! pic.twitter.com/HpnZkK8ZQo

Postcards to Voters is not an academic exercise. It’s not designed to contribute to political science theory on who votes and why. It’s designed to GOTV as powerfully as possible, to reach as many voters as possible, and to engage as many people as possible in the creation process. It’s true that it hasn’t been scientifically validated, but it does rest on a foundation of research that shows that GOTV efforts can be effective. Personally, I’m willing to forgo the hard proof on this one in exchange for maximizing inclusivity and participation in the democratic process.