Events are rescheduled all the time. Many of us live highly planned and structured lives, in which changes to plans are more of the rule than the exception. When changing the time of an event, you might say that a dinner has been pushed back an hour, or that a trip has been moved up. But you probably don’t say that the meeting has been pushed to the right. Unless you’re a member of the US military.

That’s the main finding from research that I completed with Ben Bergen and Tyler Marghetis. Specifically, members of the US military find lateral metaphors (the words “left” and “right”) more acceptable for talking about time than civilians do. Phrases like “Next Wednesday’s meeting was moved two days to the right, to Friday” were more acceptable to military members than to civilians.

You can read more about that research in an earlier post I wrote, but one of the most important parts of that research is the so what? — why we found it useful to work on this topic in the first place. It’s not just that one subgroup of English speakers uses conventions that others don’t. Instead, we find it significant that English speakers generally think about time in terms of lateral space (something that has been shown extensively by other cognitive psychologists), but only a subset of us (military members, apparently) actually talk about it that way. Yet it’s a logical way to talk. It avoids ambiguity inherent in phrases like “Next Wednesday’s meeting was moved forward two days.” (Is this meeting on Monday or Friday? People are divided on this answer).

In this regard, military members might be ahead (to the right?) of the rest of us — they might have conventionalized a system of metaphors that will gradually become more mainstream.

When we first wrote these ideas and presented them to academic audiences, I thought there was a chance we were right — that someday it would be very normal in standard American English for someone to say that “Next Wednesday’s meeting was moved two days to the right, to Friday.” I thought this because my husband is in the military and says things like this to me regularly. Soon he might not be in the military, but might continue to say things like this, particularly at work with civilians. Who might, in turn, start using the lateral metaphors at home with their own families. And so on. It seems possible that these lateral metaphors are in the process of catching on with the larger population of American English speakers.

This seemed like a solid enough idea in theory, but I wasn’t sure I’d put money on it actually happening.

Then I saw this billboard in a metro station.

To be honest, I didn’t know what being “left of boom” meant at first. But when I actually went to the site, I learned that the company behind the ad (authentic8) is selling a secure remote browser called Silo. Their entire advertisement (in billboards and online) is an extension of the metaphor that earlier things are to the left and later things to the right. “Boom” is “an exploit, a data leak, compliance violation, or worse.” Bad cyber security tools “work right of boom. They assess and analyze content after it’s hit your network. By then it’s too late.”

I don’t know the particular target audience for these ads. Maybe many people in companies that might buy Silo have military (or government) work experience. In these cases, it’s likely that those targeted by the ads are at least somewhat familiar with this explicit lateral metaphor for talking about time. But I’d also guess that military- and government-adjacent people are not the only target customers. Authentic8 is counting on potential customers to either be familiar with lateral metaphors or to intuitively understand them.

I have no idea if their advertising strategy is effective. Do people even understand the ads? Or, on the flip side, do they understand them so easily that they don’t even notice the strange metaphor? Will one of my colleagues start talking about moving meetings left and right soon?

My husband Steven and I were planning a summer vacation to hike through New England. Planning this trip felt like putting a puzzle together, searching for the solution that optimized for flight prices, my research timeline, and his vacation time. Finally, we were converging on a solution, which Steven summed up: “So we’ll move our original plan five days to the right.”

As a native English speaker, my first reaction to a phrase like that is hm, that’s an odd way to say it, but I think I get the gist. “Shift to the right” means “move the trip later.”

Who says things like that? Members of the US Military do, according to recent research I’ve collaborated with Tyler Marghetis and Benjamin Bergen on, and they don’t necessarily confine their specialized language to military contexts. Steven, a Captain in the U.S. Army, offers a glimpse into language practices we’ve observed in military members more broadly.

This finding helps us better understand the relationship between how we talk about abstract ideas like time and how we think about them.

Across many languages, people talk about time in similar ways to how they think about it. In English, for example, we say things like good times are ahead of us and looking back on the past, and cognitive psychology work has shown that we actually think of the future as in front of us and the past as behind. There are similar findings for other languages as well. Earlier work shows that linguistic metaphors for describing time can actually shape the way we think about it — saying things like the future is ahead is not just a rhetorical flourish.

But what about the reverse relationship — that our habitual thought about abstract ideas like time might make their way into language? This relationship is hard to document since language changes slowly over time, and people’s conceptualizations of topics like time are elusive. English speakers think about time is that we do often rely on a mental timeline that places earlier events to the left of right ones. But we don’t normally talk about earlier events to the left of later ones. Military members’ use of left-right metaphors provided us a chance to see a shift occurring, where these left-right mental timelines that many English speakers share have begun to seep into speech for a subset of English speakers.

To understand these left-right metaphors, we had military members and civilians read sentences about time and tell us how acceptable they considered each to be on a scale of 1-7. Both groups agreed that sentences like The meeting was moved two days later were very acceptable. However, military members found sentences containing the words left and right to describe rescheduling to be more acceptable than civilians did. In particular, they reported that a dynamic use of these words (move the meeting to the right) was more acceptable than a static use (the meeting on Friday is to the right of Wednesday). This suggests to us that this population uses these metaphors systematically — they don’t simply substitute the word left for earlier and right for later, but instead have specific circumstances when using the metaphors are more typical than others.

We also found that officers were especially accepting of these dynamic left-right metaphors for talking about events in time, more so than enlisted (non-officer) personnel. Why might this be? We can’t be sure from the data we have since there are many ways that officers and enlisted members may differ, but one difference that stood out to us is that officers are the ones who make the plans that enlisted soldiers carry out. Not only are people more likely to talk about events moving left and right if they’re the ones making plans, but the tools that officers use to make those plans also emphasize time as flowing from left to right. Whereas a canonical calendar in the English-speaking world shows seven days from left to right and then begins again on a new row, the Duty Roster — a fundamental military planning tool — doesn’t depict subsequent weeks or months below each other — they just keep going on the same line. Thus, while English speakers do tend to think of time as flowing from left to right, military planning practices an even greater left-right timeline, which was reflected in their speech. 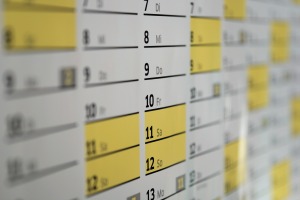 Documenting the existence of these left-right metaphors for talking about time and the way that military members use them provides us a glimpse into how patterns of thought can become patterns in language. Can these patterns in language in turn shape the way that military members think about time? This work leaves that question open, but it’s one we hope to tackle. Continuing to understand the relationship between language and thought — particularly about abstract and ubiquitous concepts like time — contributes a piece to the huge puzzle of what makes humans the brilliant creatures that we are.

This is work I completed with Drs. Ben Bergen at UCSD and Tyler Marghetis at Indiana University, Bloomington. We’re presenting it this week at the annual Cognitive Science Society meeting in London (CogSci 2017). You can also check out our poster.